A History of Asbestos 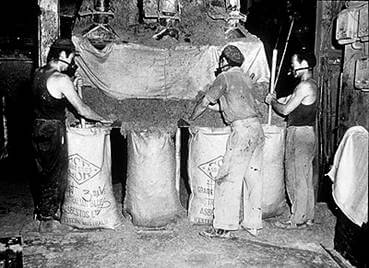 Asbestos is a common mineral found all over the world.  Before we knew of its adverse health risks, it was considered a common and useful material.

Nowadays when someone says the word asbestos there is an immediate negative connotation associated with the mineral.  However this was not always the case, and humans have found a number of interesting ways to utilise the mineral for its unique characteristics. Asbestos mining is thought to be over 4 thousand years old although not until the early 19th century was it mined in the conventional sense of the word.

Asbestos being highly flame retardant was a prized material to make cloth from. Ordinary objects like napkins, for instance, were made from Asbestos.  The mineral’s characteristics allow for a dirty napkin to be placed directly into a flames/fire and then removed with all the dirt and such burning away leaving a clean napkin behind.  Asbestos clothes were valued as they needn’t be washed in water, and could quickly be thrown into a fire for cleaning.

Fun Fact: Marco Polo visited a Asbestos mine in China, disproving the myth that asbestos came from a woolly lizard.

In the not too distant past asbestos was used primarily for its flame retardant properties and was commonly used in industrial and residential products, not to mention in building structures. This put not only the workers manufacturing the products in danger but the people who lived and worked where these products were used.

Asbestos was a common ingredient in:

Asbestos being both relatively cheap, abundant, and fire retardant crept into many facets of building materials, that is until it was found that contact with Asbestos could make people very sick and eventually cause death.

In the early 1900’s people were beginning to understand the connection between asbestos contact and poor health.  Researchers were able to see this most clearly in small mining towns. Residents experienced unusually high rates of early deaths and lung related issues.  By the mid-1920 it was becoming evident that long-term contact with the mineral almost certainly caused fibrosis.

By the 1930s countermeasures had started to be put in place, like increased ventilation. However, use continued for several more years.  In Australia Asbestos was widely used from the 1940s through to the 80s. By the 80s asbestos on a world scale had started to slow down due to the understanding of the risks, with many countries regulating the industry and phasing out the material. In 2003 Australia banned the substance entirely.

The use of Asbestos is currently banned in Australia, the European Union, Hong Kong, Japan, and New Zealand. Surprisingly The United States is not on the list. While the use of asbestos in the US has tapered off significantly, it can still be used in some products.

Some countries however still use asbestos regularly.  Notably China, Russia, and Brazil who primarily use asbestos as part of roofing products and walls.

Asbestos-related illnesses like mesothelioma and asbestosis can take decades to materialise.  The cause of the disease is exposure to asbestos fibres. Everyone is exposed to some amount of asbestos which is present in the air. The number of fibres breathed, as well as the extent/time of exposure all play a part in the emergence of illness.  Which is why the safe handling of asbestos has become so important. The asbestos fibres can become airborne, in the destruction or renovation of properties, which is why many countries have strict guidelines concerning how asbestos can be handled.

If you are purchasing a property, it may prove to be a costly endeavour if any asbestos is found in any building materials.  Removing and disposing of asbestos is often a slow and expensive process, and has in recent years been more enveloped in the building inspection process.