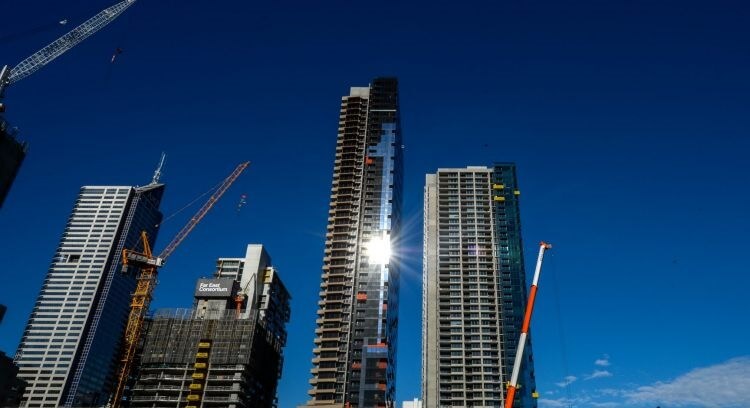 New build apartments have received ongoing scrutiny in recent years, with growing reports of slipping standards and defects. This is caused by a whole range of reasons, including inexperienced property developers, rushed timelines, incomprehensive certifiers and soaring prices of trade and materials when jobs need to be completed in short timeframes.

It’s a lot to take in and since many defects won’t become apparent until years down the track, apartment owners are often left out of pocket. We find that not all new builds are constructed poorly but there are a few things you need to be aware of.

The percentages below represent the percentage of strata title owners interviewed for the UNSW study who reported that particular issue in their complex and in our experience Victorian developments very much mirror these findings.

1. Waterproofing within the apartment – 42%

According to a 2016 article in The Age, waterproofing is considered a leading issue in new build Melbourne apartment buildings. Main areas of concern include sinks, bathrooms, kitchens, balconies, laundries, doors and window frames.

If waterproofing is not done properly in new apartments, owners can expect to fork out thousands of dollars down the line for things like: leak detection costs, repairs to cover up problems, and eventually full bathroom renovations.

In fact, haphazard waterproofing can make apartments completely uninhabitable; if proper waterproof membranes aren’t installed, water can seep through multiple levels, into walls and into floors causing rot. Not to mention mould, damp and mildew issues.

2. Cracking to internal or external structures – 42%

Buildings are moving all the time, but the movements are so minute that we don’t even notice them, so building movement is not always a bad thing. It’s when you see cracking in a building it means that the building’s movement is far beyond what it can sustain.

While cracks can be disconcerting, some of them shouldn’t have you worried. Whereas others, if left untreated, can compromise the integrity and safety of the structure.

The most common causes of cracks include:

Sizes and shapes of cracks differ greatly – each are signs contributing to different problems. Some cracks will make you liable for a bigger cost than others.

Water penetration from outside is a common problem in new apartment builds due to poor design, poor quality materials and faulty workmanship on things like external windows, doors and balconies. In high rise apartment buildings it is often seen when balconies are constructed above other units.

Water penetration is a destructive force and can cause other problems, including structural rot, electrical damage, damp and mould.

If gutters don’t do their job then they can cause flooding, leaks and even damage to your home’s foundations.

When a roof is improperly installed, it’s usually due to things like: incorrect shingle placement, which can cause water leaks, and nail misuse, causing shingles to fall down or be blown away by the wind.

Defective plumbing usually presents as seeping water in areas where it shouldn’t be as a result of faults like: bad tiling in wet areas, improper drainage, pipes that are cracked or too short etc. While these issues might sound easy to address, the reality is, if they’re left undetected, repairing them can cost thousands.

Loose tiles and bad preparation through to using too much adhesive and not evening out floors before tiles are laid are the most costly issues in apartments.

Other factors like curing concrete and the associated chemical reaction can also affect the expansion and contraction of tiles, so it’s incredibly important that tilers are experienced to do the job and don’t take shortcuts.

Noise break-through can occur due to improper home design. Builders and designers should pay attention to barriers, layout and the use of sound absorbent materials in the home. In busy inner-city areas, it’s better that apartments face inner courtyards rather than busy roads. Some vibrations induced by sound waves can cause structural damage to buildings, but what’s more likely is an unfortunate and avoidable decrease in property value, along with sleep disturbance and general frustration.

If your handrails or balustrades are non-compliant, you may be liable for rectification works but more importantly, improperly installed balustrades are incredibly dangerous.

In recent years there have been growing concerns about high-rise residential blocks and whether their fire safety measures are compliant with current Australian building codes. Decades of non-compliance has bred a culture where under current legislation even new builds can be considered a fire risk.

A building that’s considered a fire risk could have the following attributes:

Considering new build apartments for an investment property or as an owner occupier should come with more piece of mind that it currently does particularly in Melbourne and Sydney. Many potential owners avoid this opportunity altogether, understandably avoiding the associated risks that the industry’s reputation has created. Though we hope that this information helps you to ask the right questions, dig deeper into the right avenues, and know when to take a serious opportunity to the property inspector to protect your investment before signing on.