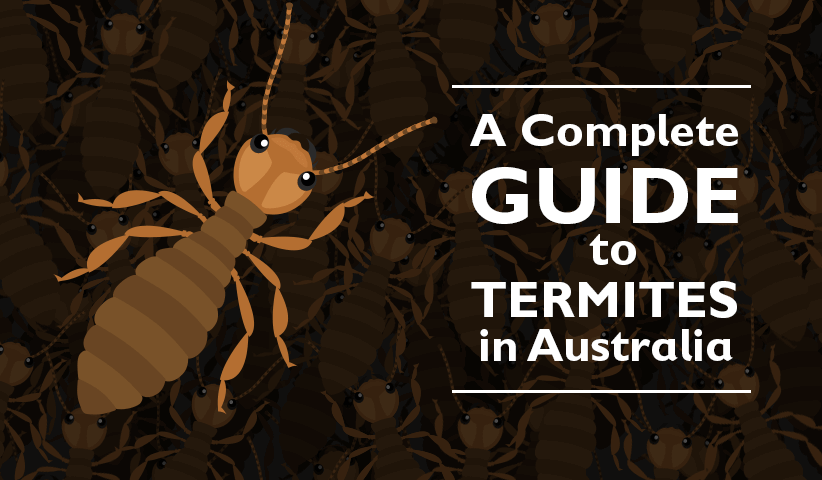 If you don’t identify a termite problem on your property early enough the results can do serious damage leading to some of the most costly home repairs possible. That is why we have put together this guide to teach you everything you need to know about Australian termites and home damage and help you identify a colony infestation before it is too late.

What are the early signs of a termite problem? 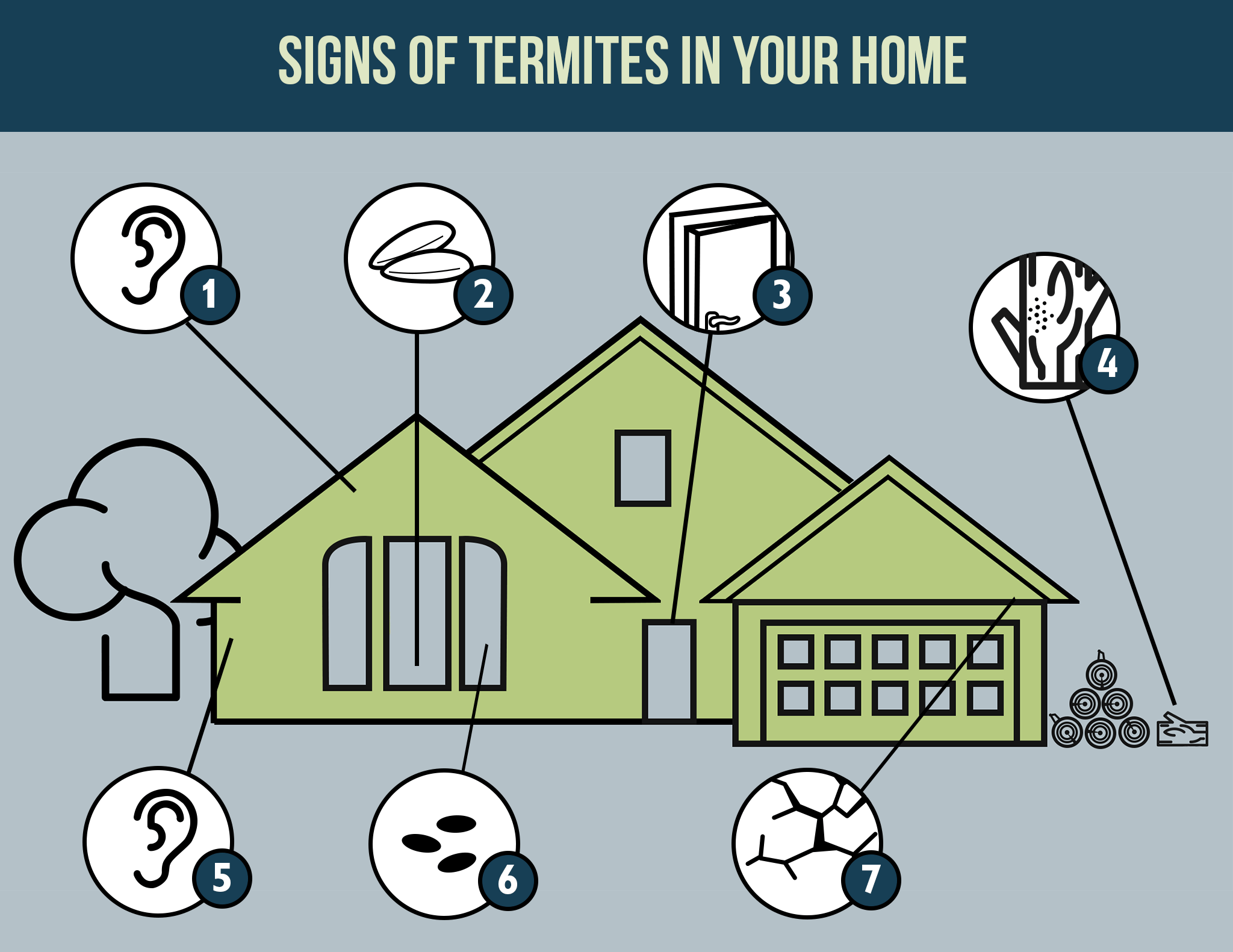 There are several signs that will tell you if termites have taken up residence in your home. Refer to the above image for some of the most important infestation indicators to look out for.

How long does a termite colony take to do damage?

This is a difficult question as it depends entirely on the size of the termite colony. Colonies can take anywhere from 2 to 5 years to create serious damage and mature infestations can range in number between 60,000 termites and 2 million.

When a king and queen first mate, the queen will lay only 10-20 eggs a day but as the colony ages that rate dramatically increases.  The queen’s abdomen grows as it matures and after a few years she will be laying as many as 1,000 eggs a day and in some species, by the end of her life cycle the queen can lay up to 40,000 eggs a day! This means rate of damage an infestation can case accelerates as it ages.

Termites don’t often venture out in the open, so when you spot an insect you think might be a termite, you’re going to want to be sure before looking into solutions.

How do I tell if they are ants or termites? 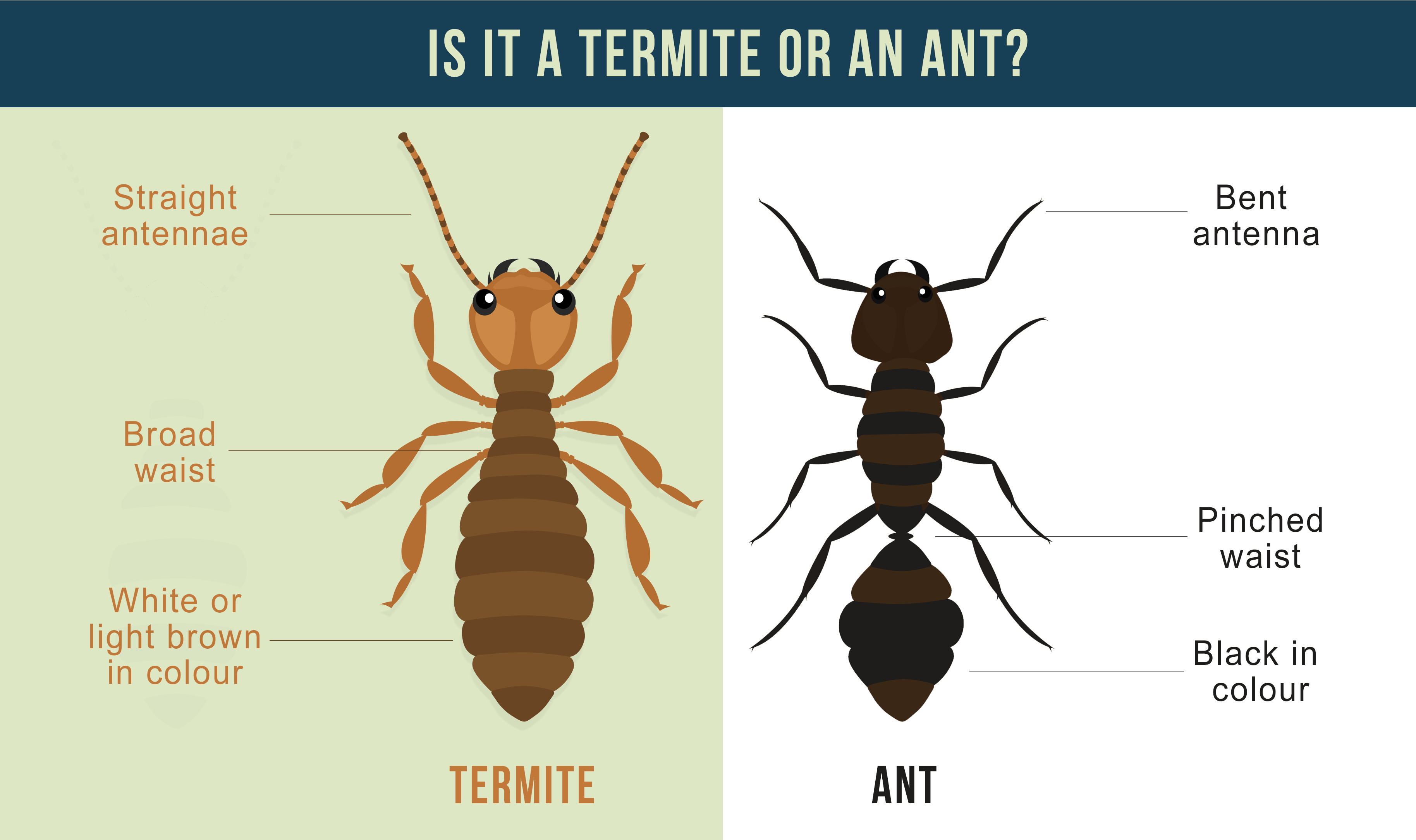 Termites and ants do look similar in many ways but there are some distinguishing features that make it possible to tell the two apart. The main difference is in the body shape. An ant’s body has noticeable segmentation with a pinched waist, while a termite’s body is more tube-shaped. If you were to look closely, you would also see that termites have straight antennae, whereas an ant has bent antennae.

Most species of termites are also white or light brown in colour, while ants will be coloured much darker.

Different species of termites in Australia

The lifecycle of a termite 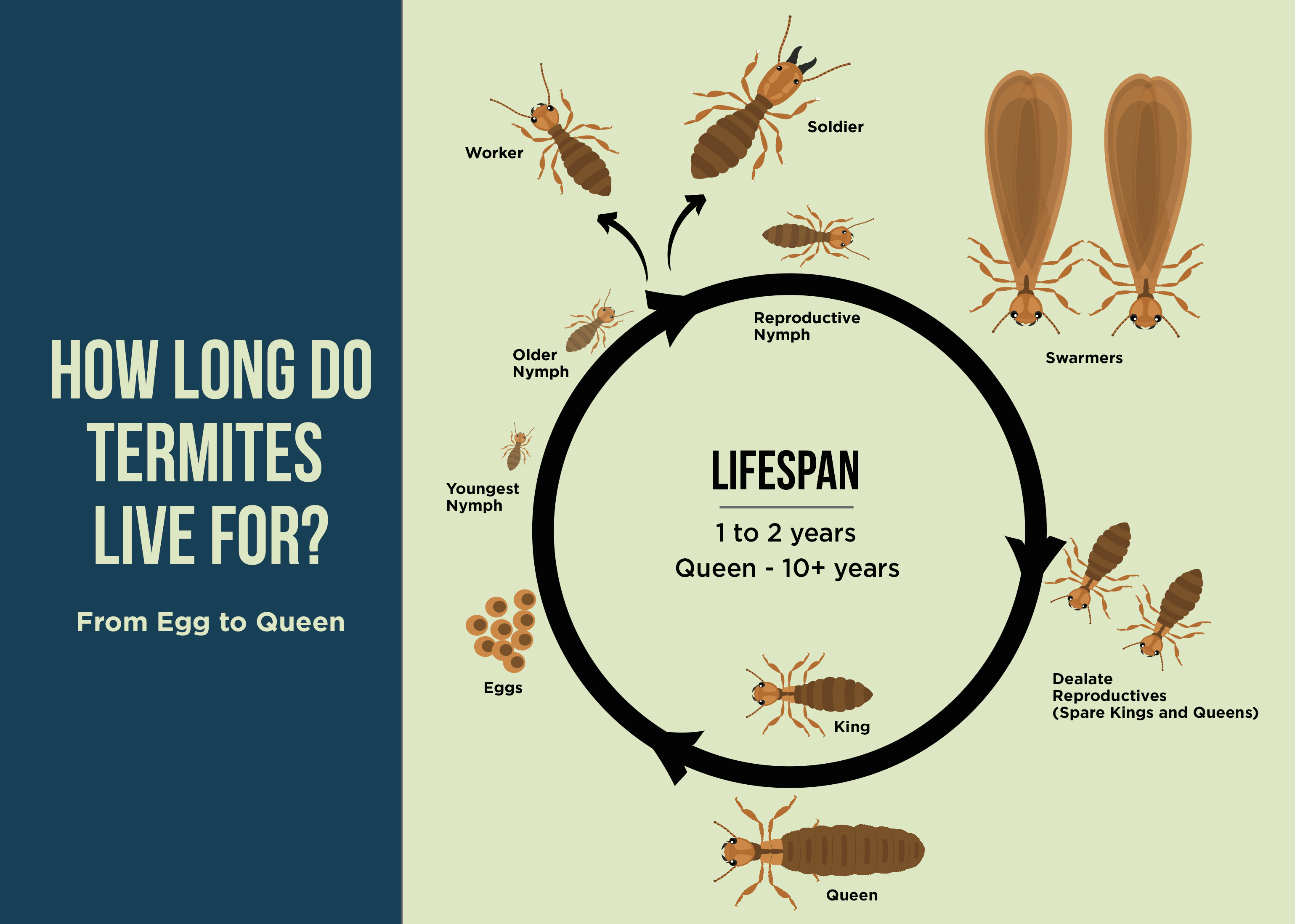 Queen: A termite queen lays eggs to ensure the growth and survival of a termite colony. Queens are usually larger than the worker termites in the colony, and they vary in colour from a pale yellowish-brown to black.

King: Along with the queen, a king termite is responsible for founding a new colony and controlling the population and development of termites in the colony. The king stays close to the size of the average worker termite in the colony, but they usually have a darker brown colour.

Nymph: A termite nymph is a stage in the developmental cycle of a termite. A termite grows to be a nymph after the larval stage, and from there, it can grow to become any one of the three types of mature termite. Whether a nymph grows to become a worker, soldier or a reproductive termite depends on environmental cues and pheromones produced by the king and queen.

Worker: Workers are the most common type of termite in any colony. The workers are responsible for all of the work that goes into sustaining and maintaining the colony. Workers have a clear, soft exoskeleton and they are also wingless and blind.

Soldiers: Soldier termites protect the colony from invaders. They are similar to the workers in some ways, but there are some noticeable differences. Soldiers tend to be a little larger than the workers, and they have large mandibles that they use to defend the colony. Depending on the type of termite, they can be a yellowish brown colour, brown, reddish brown or black. In many cases, they also have heads that are darker than the rest of their bodies.

Swarmer: Swarmers are the winged reproductive termites that fly from the nest to start new colonies. When a male and female swarmer pair off, they locate a nesting site and lose their wings. Swarmers have two pairs of flat wings that rest over the abdomen when they are not in flight.

Protecting your home or investment from termite infestations

Termites are difficult to spot and often stay in hiding. However if you identify any termite types in or around your home, or notice any of the telltale symptoms you need to make sure all areas of your home are checked professionally to understand the extent of the infestation. You can then take informed steps to remove the issue in a full extermination, or fully understand what scope of downtime and costs you’re getting into before buying a home, rather than allow any remaining parts of a colony create future problems. Above Board Building Inspections specialise in Building and Pest Inspections that identify critical pest issues and evidence of where substandard building practises have caused infestations to begin.